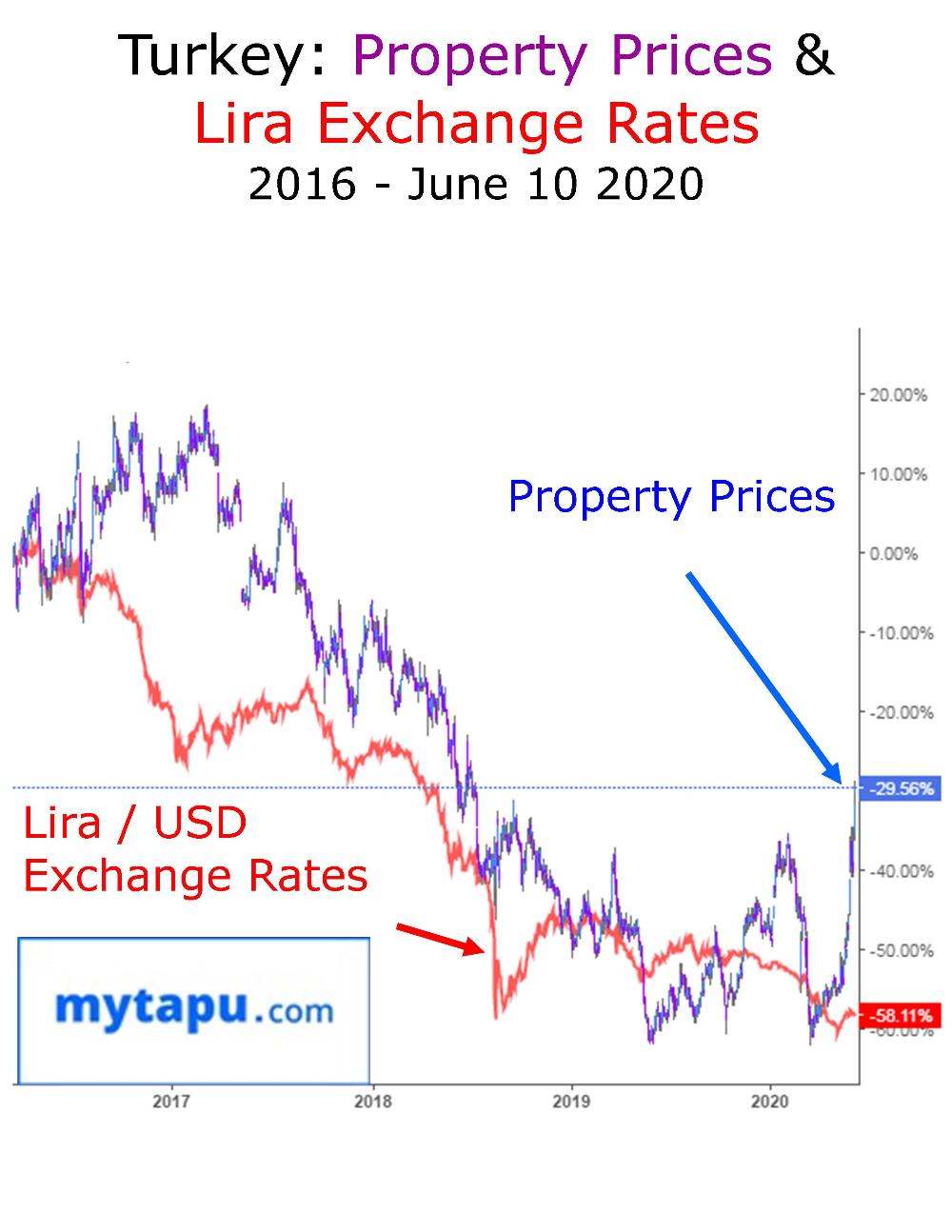 At mytapu.com, our leading indicator of Turkish residential property prices has been very strong in the most recent two week period, increasing 30%. This has been unexpected in market conditions surrounding the pandemic, which are negative for property prices because renters’ ability to pay is reduced, and as rents decline, landlords sell, and new buyers postpone purchases.

Now we know why the leading price indicator has been so strong. The news is that policy makers have imposed upon state banks to offer a new mortgage loan program with extremely favourable terms. The terms are so favourable, they are equivalent to the banks paying buyers and subsidising buyers to purchase a property. Turkey’s three largest state lenders and two of their Islamic finance banks have now announced that they are delivering mortgages with annual interest rates nearly 4% below the rate of inflation, and 13% below the average annual decline of the Lira in foreign exchange terms for each of the last three years...

Mortgage rates below the 'cost of capital', whether it be inflation or foreign exchange rate depreciation, has a certain result of attracting investment flows and driving property prices higher.

Less than 12 months ago the mortgage rates in Turkey were a high as 24% When it became clear that policy makers intended to take the rate significantly lower, this economist forecast a reversal in the downward price trend. That forecast has materialised and prices are now moving higher. Before March the mortgage rates had declined to 12-14%. Today’s additional move down below 8% is another 30% decline and will most certainly have a large impact on the future trend of prices, higher.

The Turkish Lira mortgage loans will have up to 15 years' maturity with interest rates as low as 7.68% simple straight rate (not compounded, AER or APR) % and a grace period of up to 12 months, with a low equity-down payment rate starting at 10%, in other words, 90% loan to value (LTV). The loan limit per customer will be TL 750,000 (approximately $110,000) to ensure widespread availability, and will be available for residences in three major cities, namely Istanbul, Ankara and Izmir, with a maximum of TL 500,000for other cities.

The only impediment at this time is purchasers’ lack of down payment cash equity. This is likely to be overcome via family networks after some little time. The longer term impact is almost certain to be positive throughout the remainder of this year.

Needles to say, some agents and developers have raised prices immediately. There should still be room to manoeuvre, and the experienced Transaction Managers at mytapu.com are happy to show you where to find and buy property in Turkey, and how to buy at a discount...

The key point is that mortgage rates falling below 8% is likely to have a big impact on property prices, because 8% is a key mathematical threshold for repayment affordability. This was highlighted in this economists forecast of the Turkish housing market, published in Forbes magazine in 2007. The push by policy makers below the key 8% threshold is one further example of how mytapu is affecting policy making in the real estate market in Turkey. The other notable occurrence was the recent adoption by policy makes of new regulations requiring an appraisal report to be provided to foreign buyers of Turkish property, mentioned in this article Buying-Turkish-Property-Why-use-an-Eksper-Rapor. 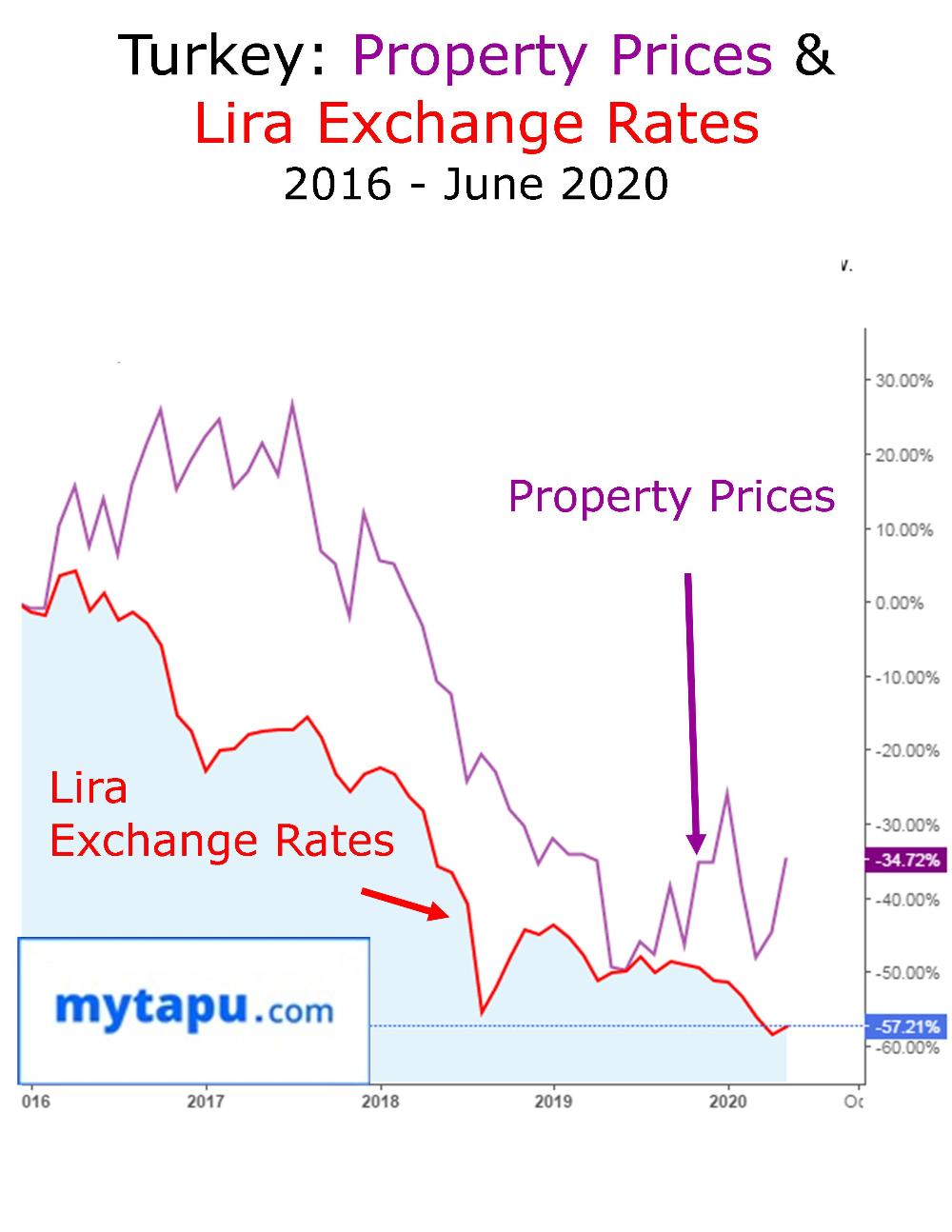 Demographic demand trends remain intact if a little softer then the previous two decades. Pent-up demand is ever present in the life-cycle segment, due to 3+ years of stifled disposable income, and un-inviting price declines. Supply is ample and abundant for the forseeable future. The market on-balance is likely to experience a series of short term upward price movements, each of limited extent, and limited duration.

The Long-term investment performance of residential Turkish real estate has been very poor, declining 34% in Lira terms during the last four years. At the same time the decline in the TL/USD exchange rate of 57% has increased the losses. Present day bounces off previous lows in both the Lira and property price indicators may be temporary, from the perspective of the long term trends, and the macro-economic challenges that effect exchange rates.

Property prices during the COVID crisis retested last summer 2019's lows, and have bounced back up. This has occurred in an environment of completely negative news and sentiment. Only the decline in mortgage lending rates from 24% to 12% since last summer has been positive, as we forecast 12 months ago. In these circumstances it is probable that the bounce in property prices off previous long-term lows is signalling the long-term bottom has been reached. Similarly the bounce in the Turkish Lira suggests the long-term bottom has been reached. A look at the chart reveals the greater price volatility in 2017 as the upward trend changed downward, as we correctly forecast.  Likewise, the increased volatility of the most recent 12 months may be signalling the downward trend is changing upward. However, a word of caution is justified, because the macro-economic imbalances that effect exchange rates remain quite challenging, and an upward trend in the Lira remains very uncertain,  and explains the recent property price volatility.

These considerations above do not mean that prices will move more than 20-30% higher immediately, but it is likely that prices will remain firm into the final half of this year. More likely is a continuing gradual uptrend that is frequently interrupted by occasional downward setbacks. These price declines should be used by investors to buy astutely at discount. 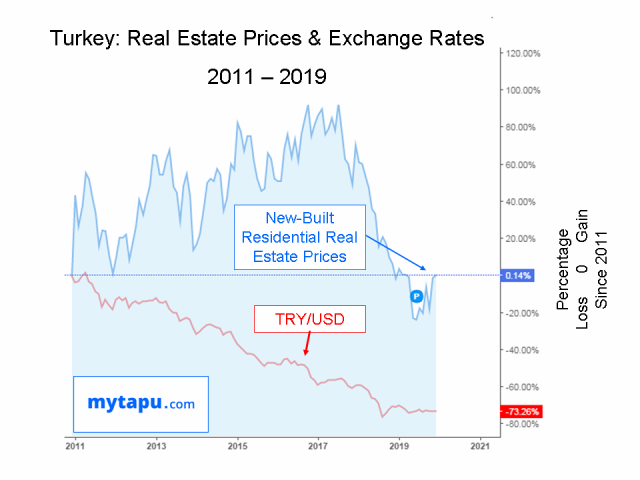 February 15, 2020 For the first 45 days of 2020, the Turkish Lira has declined approximately 3.5% and Turkish real estate asset values have risen approximately 13% (leading indicator). This performance is in line with our existing market out look and forecast, updated below, and since last summer. The slight weakness in the Turkish Lira that was anticipated and has materialized, did not lead to further declines in Turkish Lira asset valuation. Instead, Turkish assets appear to be revaluing upwards, correlating to US Dollar valuations, which is a common occurrence at market bottoms. This is noteworthy, in the context of the overwhelming flow of 'bad news' in the market over he first 45 days of 2020. A market that moves higher when the news environment is negative, is a market that is relatively strong, changing trend, from down to up. The primary driver behind this change is the decline in interest rates. This decline in interest rates and upward trend change in property prices was accurately forecast by mytapu 8 months ago, last summer. All investment implementation (see below for strategy) since August 2019 that has followed these strategy recommendations based on these forecasts is now profiting from gains of 15-20% plus, proving successful. As the peak summer tourist season approaches, with seasonal peak hard currency tourism revenues, the upward revaluation potential of the Turkish Lira exchange rate increases. As these two trends are likely to remain intact, the expectation now is that the real estate market in Turkey will resume business as usual in September, with life-cycle transactions continuing after two years abatement. The market prices are likely to be showing stronger, in specific locations, and generally, firmer, not declining, despite the existing supply over-hang. Under these circumstances, new investors should continue to seek liquidity distress sales for discounts and be less demanding on purchase prices. Sellers should be inclined to hold their pricing firm, if they can endure a 3-9 month wait for liquidation. 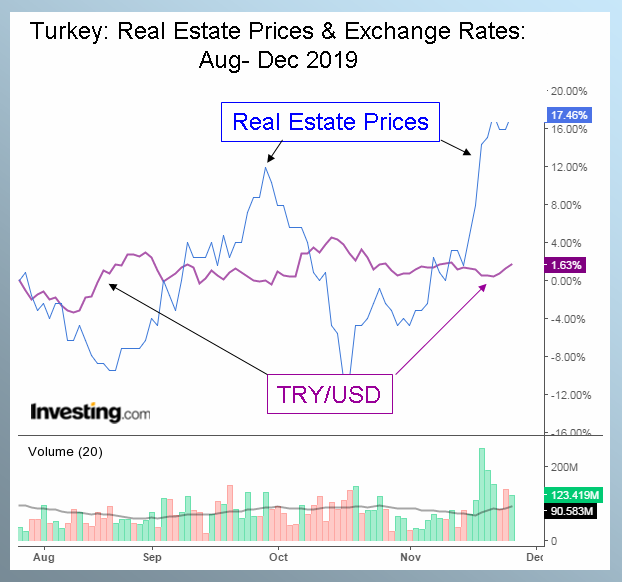 The outlook for property prices has improved significantly, up 17% in Lira terms since August, while the Turkish Lira exchange rate has been stable. This rise comes after President Erdogan’s visit to Washington D.C, where he had personal one-on-one meetings with five U.S. Senators, each on specific issues that trouble US –Turkish relations. As a result, the U.S. Senate blocked passage of key anti-Turkish legislation. The media apparently has been overly pessimistic on U.S.- Turkish relations, and after the Washington visit, asset values in Turkey began to revalue upwards. With a stable Lira, the prospects for property prices to move higher over the next 3 months into the spring appear promising. In the four months since August, the Lira is stable and has stopped going down. Residential real estate price indicators continue to fluctuate up and down, now breaking through the upper end of the valuation band. This is a typical occurrence at a market bottom. Investors should use weakness in the Lira over December and January to negotiate on property purchase prices. To ensure that negotiated prices are secured, it is necessary to close and complete on a purchase promptly, within 3 days. Avoid purchase contracts and reservation deposits..>! Ask why... Prompt completion requires Advance Preparation: bank account, tax numbers, identity documentation, and transaction authorisations.

Contact the Team at mytapu.com here, to learn more…

Enquire today about what criteria should be included in your property search, by sending an email to info@mytapu.com and include a WhatsApp or Viber number to receive a complimentary call back…

Advice for Property Matters in Turkey

The True Cost of Citizenship by Investment in Turkey, for Investors’ Capital AND for...

The Guide to Buying a Property in Turkey

Why Istanbul Lifestyle Retains its Allure for Real Estate Investors…

Keep informed about property matters in Turkey, with articles like this one…sign-up for our periodic Newsletter